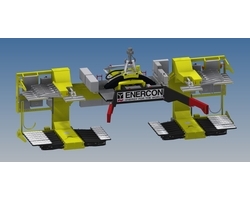 ematec is developing for Enercon the world's first rotor blade yoke that can handle blades weighing up to 50 tons. Photo: ematec

ematec is moving up a gear: The expert supplier of lifting equipment for the wind power industry, headquartered in Memmingerberg (Bavaria), now offers its innovative RBC-D rotor blade lifting systems for a completely new weight class. The brand-new RBC-D 50 Greenline supports rotor blades with a blade weight of up to 50 tons, thus setting a new quantum leap on the world market. The special highlight: the RBC-D 50 itself weighs just 27 tons. Enercon is the first wind turbine manufacturer to benefit from the new generation of yokes from the technology and innovation leader from the Allgäu region.

'We already have six yokes of the current model RBC-D42 with a payload of up to 42 tons in use worldwide, and our teams are highly satisfied with them,' says Ute Varrelmann, Head of Installation at Enercon. Enercon uses the RBC-D42 yokes and has already ordered another eight models of the new generation RBC-D 50, primarily to install its newly developed EP5 platform turbine generation. Significant time and cost advantages that can be achieved with the help of the yoke were decisive for the acquisition of the equipment: For each turbine, for example, the time for blade installation is significantly reduced by up to 60 per cent.

A unique feature of ematec's patent-pending technology is that the RBC-D yokes adapt individually and particularly quickly to each rotor blade thanks to their adaptive blade support; they are thus considered to be the most innovative and universal yokes for single-blade assembly of wind turbines in the world market. At the same time, ematec yokes are among the most expensive but also the most economical lifting equipment for the single-blade assembly of rotor blades.

Sustainable yoke concept
'It is true that our yokes are in the high-price segment by international standards. However, when making an investment decision, you have to consider the life cycle costs. This is exactly where our yokes are unbeatable in the end because they are not only designed for one or at most two blade generations, but for a service life of 20 years and beyond,' says Manfred Eberhard, CEO of ematec AG. With other manufacturers, on the other hand, the yokes are always limited to certain blades and must either be extensively retrofitted or completely replaced for new blade generations.

The Enercon order pleases Manfred Eberhard, who can now work on the largest order in the company's history with his team of 50 people: 'We are very honored by Enercon's confidence in us. When a global player is so convinced of you, you know you are doing something right. We have invested over 1.6 million euros in the development and it was definitely a good decision.'

Manufacturing at full speed
The production facility in Memmingerberg in the Allgäu region is currently running at full throttle. Since March 2021, ematec has delivered one RBC-D-42 Green Line truss at a time to Enercon at monthly intervals, and production for the first truss of the RBC-D-50 series has already started simultaneously. With the latest development, the engineers from Memmingerberg have outdone themselves: 'The new RBC-D 50 will weigh just 27 tons, but will be able to carry 50 tons. We have once again fine-tuned the entire design in order to be able to achieve this quantum leap,' explains Construction Manager Julian Eberhard.

About ematec's RBC-D yokes
ematec's RBC generation rotor blade yokes are the world's first and only single blade yokes that can be automatically and individually adjusted to the respective rotor blade, always balancing themselves. They can accommodate blades between 45 meters and 110 meters long and stabilize them up to a tilt angle of ±30 degrees, thus preventing uncontrolled movements of the units. For safe handling of the rotor blade, the RBC always finds the exact center of gravity individually. Two counterweights on the two yoke wings automatically adjust to the center of gravity - with and without the rotor blade.

The 'D' in RBC-D stands for 'Double' and means that in addition to the lower telescopic gripper, the upper one is also equipped with fourteen hydraulically moved and gimbaled grip pads.

Further highlights: The hydraulic cylinders of the grabs are equipped with integrated safety valves that make it impossible for the rotor blade to slip out - even in the unlikely scenario of incorrect operation. With a slope height of just about 3.5 meters, the RBC series makes crane management much easier, especially in view of the ever-increasing hub heights of wind turbines.

Ready for use in record time
On the construction site, the RBC yokes are ready for use faster than all other yokes, because they automatically move into their operating position and the attachment to the rotor blade also takes place in record time. The RBC yokes need less than 15 minutes for these two steps.

The Green Line variants of the RBC yokes are powered by high-performance rechargeable batteries designed for a working time of 16 hours at temperatures down to -20 degrees Celsius. The battery operation is double redundant. Thanks to ematec's Green Line technology, wind turbine manufacturers bypass the more stringent Euro 5 and USA EPA Tier 4 final emissions regulations that have applied to combustion engines since January 1, 2019. In addition, ematec has deliberately kept the electric motor below 48 volts, which means it can also be used in the USA without any problems and meets the requirements of UL (Underwriters Laboratories).

For further information on the RBC- and RBC-D yokes, visit https://www.ematec.com/en/rbc/.