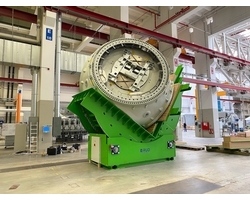 Optimised turning process: The rotor hubs can be turned in a few minutes with the RUD Tecdos TM. It is exceptionally ergonomic and safe. Photo: RUD

Aurich/Aalen (jm).
ENERCON is the first wind turbine manufacturer to break entirely new ground in handling rotor hubs on the assembly line: Instead of using cranes and slings, ENERCON relies on a compact turning table from RUD Ketten Rieger & Dietz GmbH, based in Aalen (Baden-Württemberg, Germany). The RUD Tecdos TM Tool Mover turns the rotor hubs, which weigh up to 65 tonnes, safely and quickly. The turning process, which had previously taken around two hours with a crane and chain, is now completed in just a few minutes. This is optimisation at its highest level - not only in the process of intralogistics, but also in terms of ergonomics and occupational safety.

The RUD Tecdos TM turning table has been in use at ENERCON, more precisely at its new Mechatronic Competence centre based in Aurich, (Lower Saxony, Germany) since April 2021. Here, machine houses and rotor hubs are produced for the entire ENERCON range of products: from the EP1 to the EP5 platforms, and the ENERCON e-nacelles will also be produced there in the future. After painting, the large-volume cast bodies of the rotor hubs are taken to the assembly line, where their inner workings are installed. The compact turning table from RUD comes into play here.

The rotor hub must be turned on the assembly line in the factory. Weighing up to 65 tonnes and with correspondingly large dimensions, it represents a mammoth task in the intralogistics process. “Previously, we turned the hubs around with two indoor cranes. This could take up to two hours,” explains Keno Claassen, responsible for the procurement of resources in the competence centre. “With the RUD turning table, we can now complete the turning process in just a few minutes,” Mr Claassen adds. The RUD Tecdos TM thus reduces the logistical effort in the factory, so ensuring an optimised process in the production and assembly of the rotor hubs.

A flexible powerhouse: The RUD turning table can manage 65 tonnes of load and three sizes of hub

The RUD Tecdos TM can safely pick up and turn loads of up to 65 tonnes and three different hub sizes. These were ENERCON’s demands, ones which RUD had to implement when designing the turning table. “The maximum load was not a problem; we were able to meet it by individually adapting our standard range of the RUD Tecdos TM,” explains Ralph Roth, who works at RUD in the development and design of Tecdos mechanical engineering.

The rotor hubs have a diameter of up to 3.5 metres and in the standard version the turning table’s supporting surface is 2.5 m x 3.5 m (W x L). Together with the Y-shape of the hub and a support angle that does not exactly correspond to 90°, these were not the optimal prerequisites for a stable turning process. The solution: special layers that can be fitted to the RUD Tecdos TM and perfectly matched to the three different hub sizes. This is because the hubs have different sizes and different angles - 5 degrees, 3.5 degrees, and 2.5 degrees - which had to be considered when designing the layers.

By using RUD’s rotor hub turner, ENERCON benefits not only from process optimisation and time savings at the Aurich production plant. Because the indoor cranes are no longer used to turn the hubs, which weigh many tonnes, the RUD Tecdos TM also protects the entire intralogistics infrastructure. This allows the cranes to perform other tasks. One plus for the employees: The turning process is now exceptionally ergonomic and safe, thanks to the RUD turning table.

From customised to standard designs

In other areas, such as tool and mould-making, the RUD Tecdos TM has already revolutionised the handling of tools and other loads that can be measured in tonnes. Ralph Roth also sees great potential for their use by wind turbine manufacturers in handling rotor hubs: “Already, two other factories in the wind turbine manufacturing sector have asked about our newly developed turning table.” That's why RUD has made special production its standard without further ado, and has included the hub turner in its portfolio. But, of course: “Even if the machine itself is a standard version, we do, of course, create special versions perfectly tailored to the respective requirements”, Mr Roth continues.

Despite its high load-bearing capacity of up to 65 tonnes, the compact dimensions of RUD’s rotor hub turner are also impressive. 'We made sure that the turning table was no wider than 2.50 metres so that it could be transported on conventional low loaders without the need for any special permits,” Mr Roth explains. When designing a new RUD Tecdos TM, RUD focuses on the turning process on the customer’s site and the entire procedure from production to logistics and regular customer service. This way, RUD offers the best possible solution for every customer requirement.

About ENERCON:
For over 30 years, ENERCON wind turbines have been characterised by innovative technology, excellent reliability, and high economic profitability. With a proven drive concept, pioneering technological developments and a high level of quality, the company is continuing to set new standards in the wind energy industry.
The product range currently includes systems ranging from 800 to 5,500 kilowatts. The German wind turbine manufacturer has built more than 30,766 turbines worldwide. These have a total output of over 54.5 gigawatts (as of December 2020). As a leading manufacturer of wind turbines, ENERCON is working constantly to promote renewable energy supply worldwide through its practical products and services.

About RUD:
The company RUD Ketten Rieger & Dietz GmbH u. Co. KG, was founded by Carl Rieger and Friedrich Dietz in Aalen, Southern Germany, in 1875. Today, it has a workforce of more than 1,700 employees in 120 countries and achieves annual revenues of over 200 million Euros. RUD is acknowledged as the global leader in the tyre chains, sling chains and chain systems industry (According to German business journal Wirtschaftswoche, Prestige-Hochschule St. Gallen). With the group's motto, 'Tradition in Dynamic Innovation' firmly in mind, this family-run company continues to manufacture integrated chain and component solutions at its sites in countries including Germany, Australia, Brazil, China, India, Romania and the USA. Its product ranges not only include attachment fittings and non-skid chains but also hoist chains and conveyor systems. The long-established German company also manufactures tyre protection chains and interior and exterior fixtures and fittings.
Ingo Jensen